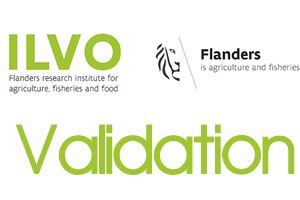 Aminoglycosides are a class of antibiotics used mainly in the treatment of aerobic gram-negative bacilli infections, although they are also effective against other bacteria including Staphylococci and Mycobacterium tuberculosis. They are often used in combination with other antibiotics.

As an effective antibacterial agent, aminoglycoside antibiotics are one of the commonly used veterinary drugs in animal husbandry and aquaculture. In addition, they are often added to feed to promote animal growth and development. However, due to illegal or unreasonable use in the breeding process, excessive residues of aminoglycoside antibiotics in food have become one of the most concerning food safety issues. The main toxic side effects of such antibiotics are manifested in the impairment of hearing and kidneys. Therefore, many countries and institutions have established clear maximum residue limits for the residues of such drugs in food.

This validation was performed by Dr. K Broekaert,  Dr. S Ooghe and Dr. W Reybroeck from ILVO-T&V (Technology & Food Science Unit of the Flanders research institute for agriculture, fisheries and food, Melle, Belgium) according to Commission Decision 2002/657/EC and to the CRL guidelines for the validation of screening methods for residues of veterinary medicines (Anon., 2010). The following analytical parameters were checked: detection capability, test specificity and test robustness (impact of deviation of the test protocol, impact of the milk composition and stability of reagents). Further the suitability of the QuaTest Amino V rapid test kit to screen different milk types (UHT milk, sterilized milk, reconstituted milk powder) was investigated.

Results of this validation show that QuaTest Amino V rapid test kit is a reliable test for screening of raw cows’ milk for residues of aminoglycosides. The test kit is capable to detect all tested residues of all aminoglycosides (marker residues) on the EU-MRL list in milk (Commission Regulation (EU) No 37/2010) except for spectinomycin (not detected at 20,000 μg/kg). Apramycin and paromomycin (on the list but no MRL) are at least in 95% of the replicates detected at 70 and 1 μg/kg, respectively. The test also showed to be robust.

As the basic guidelines of Ringbio, we research and develop affordably high quality products for our customers, partners and industry contributors. This test kit is also developed and validated based this guideline. We hope to help milk producers with the kit to minimize the drug residue of aminoglycosides such as gentamicin, neomycin, kanamycin and streptomycin so that the final product is marketable and profitable and also safe for consumers.