Milk in its natural form has a high food value since it is comprised of a wide variety of nutrients that are essential for proper growth and maintenance of the human body. In recent decades, there has been an upsurge in milk consumption worldwide, especially in developing countries, and it is now forming a significant part of the diet for a
high proportion of the global population. As a result of the increased demand, in addition to the growth in competition in the dairy market and the increasing complexity of the supply chain, some unscrupulous producers are indulging in milk fraud. This malpractice has become a common problem in developing countries, which lack strict vigilance by food safety authorities. Milk is often subjected to fraud (by means of adulteration) for financial gain, but it can also be adulterated due to ill-informed attempts to improve hygiene conditions.

As currently goat/sheep milk is considered as another source of protein for human consumption, which is regarded as high nutrition, low allergic. thus in the dairy field, one of the most common frauds is the adulteration of higher value types of milk (sheep and goats, or camel) with milk of lower value (cow's milk). This illegal practice has an economic advantage for milk producers and poses a threat to consumers' health because of the presence of hidden allergens as, for example, cow milk proteins, in particular, α(s1)-casein and β-lactoglobulin. The urgent need for sensitive techniques to detect this kind of fraud brought to the development of chromatographic, immuno-enzymatic, electrophoretic, and mass spectrometric assays.

Here at Ringbio, we have developed several rapid test kits for customers in need to detect different milk fraud with other milk sources.

There are now 3 kits available.

General components of the test kits

If you are interested in this kit, please feel free to contact local RINGBIO distributors or our sales team by email to [email protected]

Video on how to use this test kit

General operation steps of the kit 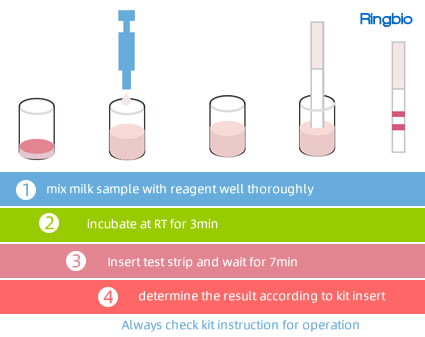 Other technologies in milk fraud detection

Instrument analysis such as liquid chromatography, MALDI-TOF,etc have been seen in report to detect milk fraud, in which fatty acid, casein etc are the target analyte and fingerprint for identification. ELISAs based on the same principle as lateral flow immunoassays are also employed in the related analysis. Other technologies such as SDS-PAGE, WB, etc are also used in report.