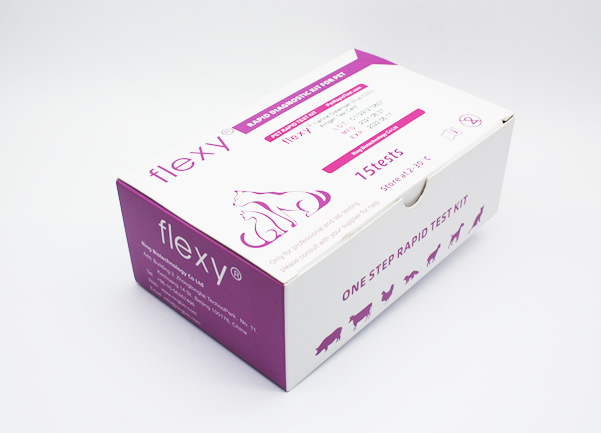 Feline Calicivirus Real-time PCR test, FCV RT-PCR Test is to detect feline calicivirus in swabs of mouth, eye and nose of cats. which is rapid, accurate and easy-to-operate. Sensitivity 100%, Specificity 100%..

Feline calicivirus (FCV) is a virus of the family Caliciviridae that causes disease in cats. It is one of the two important viral causes of respiratory infection in cats, the other being Felid alphaherpesvirus 1. FCV can be isolated from about 50% of cats with upper respiratory infections. Cheetahs are the other species of the family Felidae known to become infected naturally.

What is feline calicivirus?

Feline calicivirus is a highly contagious virus that causes a mild to severe respiratory infection and oral disease in cats. It is especially common in shelters and breeding colonies, and often infects young cats. Most cats recover completely after a calicivirus infection, but rare strains can be especially deadly. The virus poses no threat to humans..

Feline calicivirus (FCV) belongs to a large family of viruses named Caliciviridae, whose members infect a wide range of vertebrate animals, including rabbits, livestock, reptiles, birds and amphibians. The human virus norovirus, which causes a brief but unpleasant gastrointestinal disease, is also a member of the Caliciviridae family.

Several strains of FCV circulate in domestic and wild cats. The virus mutates readily, leading to new strains that may not be fully covered by existing vaccines. Strains vary in the severity of the disease that they cause, with the majority causing only mild disease. The ability of the virus to mutate likely explains why after 40 years of vaccinating against FCV, outbreaks still frequently occur.

A cat’s symptoms will depend on the strain of FCV it contracts. At first the cat will have symptoms that look like a cold, with sneezing, nasal congestion, fever and sometimes drooling. Large amounts of discharge can come from the eyes and nose. In more severe cases, cats can also develop inflammation and ulcers on the tongue, and the lining of the mouth. Lethargy, mild lameness and lack of appetite may also occur.

How is FCV diagnosed?

Pet owners should always bring their cat to see the veterinarian if it shows signs of respiratory disease. Commercial labs detect the presence of FCV in two ways: by growing the virus in cells in a petri dish, or through reverse transcriptase PCR (RT-PCR), a procedure that detects a segment of genetic material that is specific to calicivirus. Both tests are equally effective, though the RT-PCR test may be more common in some areas, as part of a panel that tests for several organisms that cause respiratory disease.